Skip to content
How do you feel before cataract surgery? 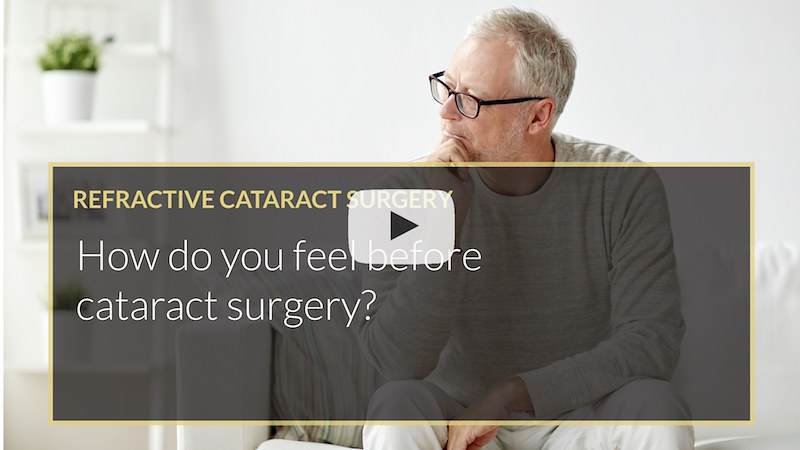 How do you feel before cataract surgery?

People who have a cataract, usually relay several symptoms, but there’s a typical pattern.

The first thing is that a cataract is a clouding of the natural lens that is located inside the eye. It’s not a film growing on the front of the eyes as some people imagine it to be. Therefore, the natural crystalline lens inside the eye is a clear structure that lets light through and focuses the light on the retina. Over time, that lens can lose clarity, and that’s a gradual process. This can have the effect of allowing less light into the eye, and it can cause the light to scatter in different directions. The kind of symptoms people notice is dazzle and glare from lights. It can be especially noticeable when people are driving at night. The lights of other cars and street lights can have a dazzling effect or halos around them.

Don’t let post-COVID cataract queues delay you from getting the treatment you need. Save your spot now with a virtual appointment

Meet online or over the phone with surgeon Prof Muhtaseb, and get a clear answer on your cataract surgery options from the comfort of your home. You’ll also discover the little known possibility of fixing your reading and/or distance vision at the same as you fix your cataracts. Click the button below now to book your video or telephone appointment.

GET A VIRTUAL APPOINTMENT

There’s a general clouding and fogging of the vision, dazzle and halo effect. People also say that their close vision is affected. They find it more difficult to read. The letters can start to get jumbled up and cloudy, or they can get shadows and ghosts next to objects. Things like watching TV also become difficult.

People say that the quality of the television screen isn’t good and that the subtitles or the little headlines on the news channels, as they roll along the bottom of the screen, aren’t so clear. These are the typical symptoms that people describe.

People sometimes describe more specific symptoms according to their activities or hobbies or leisure interests.

You might say that someone who enjoys golf, either can’t quite see where the ball is to tee off, or when they tee, they can’t see where the ball has travelled or where it’s landed. Other people might describe difficulty with other hobbies.

I get quite a lot of patients who enjoy walking in the countryside; rambling, and some people enjoy the water facilities in South Wales such as sailing. They will say that they can’t quite read the maps if they’re rambling or orienteering, or the dials on their boats. Some symptoms can be quite specific. They’re not able to function as independently and as fully as they used to.

The other thing that people who’ve got cataracts, tell me, is that they feel more dependent on other people. They feel that they’re less able to undertake their normal daily activities and tasks. Even simple things such as driving, or being borderline on the driving standard, or losing confidence in crossing the road or walking up and down steps. Therefore, people generally feel quite restricted in their life and maybe feel as though physically, they can’t do what they need to do. Visually, they’re impacted and lose some of the confidence or the visual ability to perform those functions. So life generally becomes a little bit less fun; a little bit less enjoyable.

When people are less able to perform their hobbies – for example, people that do arts and craftwork – life becomes a little bit less fun and a little bit less enjoyable. That makes the results of the surgery much more rewarding for the patients – and me – when we restore their vision.

I invite you to book a consultation to determine your suitability for refractive cataract surgery or refractive lens exchange. It’s the only way to determine your suitability for these procedures and to have an in-depth discussion regarding the risks and benefits of each of them. I look forward to seeing you there and taking you through the journey to achieving your desired postoperative outcome.

iLase is the private practice of Consultant Ophthalmic Surgeon, Prof Mohammed Muhtaseb. Based in South Wales, he is one of the very few ophthalmologists working in the UK who is a fellowship-trained specialist in Cornea, Cataract and Refractive Surgery. He holds full specialist registration with the General Medical Council and was appointed as a Consultant in the NHS in 2006.

We use cookies to track your use of our website. This enables us to understand how you use the site and track any patterns with regards to how you are using our website. This helps us to develop and improve our website as well as products and / or services in response to what you might need or want.

These cookies are essential to enable you to use the website effectively, such as when buying a product and / or service, and therefore cannot be turned off. Without these cookies, the services available to you on our website cannot be provided. These cookies do not gather information about you that could be used for marketing or remembering where you have been on the internet.

These cookies allow our website to remember choices you make and provide enhanced features. For instance, we may be able to provide you with news or updates relevant to the services you use. They may also be used to provide services you have requested such as viewing a video. The information these cookies collect is usually anonymised.
Go to Top